I have been putting off this subject for a while because I don’t want to sound preachy or unrealistic, and I also don’t like stepping on my own toes all the darn time, which I always seem to be doing. BUT, its a new school year for us, our second year homeschooling, and in the spirit of starting fresh and being optimistic about the fabulous environment I can create for my children this year, here goes: Cell Phones are a busy Mama’s little helper, especially if you’re a mom like me who tends to get lost on the road all the time. They help us multi-task, making it possible to get in a quick call to the insurance company while making our coffee in the morning, and then again in the afternoon. YET, do I really want my children to live in a world where their mama may drop them at any moment to pick up the phone, turn away from them while holding up a serious “Wait one minute while Mama talks on the phone” finger, and then chat away with the same old darn insurance company or maybe even with a dear Mama friend of mine? I’m not saying that I want to drop my friendships or stop taking calls from family and from well meaning businesses, BUT I am saying that cell phones have changed the telephone game, and as a stay-at-home-mom, I am not going to play by the new rules any longer. I want to go back to the days when people called a telephone in order to reach me, rather than people calling me. Cell phones make it possible for our phone to be a part of us, rather than a thing we can connect to on our own time and when we are available. When I was a kid, if my parents were busy, then they weren’t around to hear the phone ring or couldn’t usually get to it on time. Board game time and bike riding time were not interrupted by phone calls. But now, who cares if we’re busy or engaged with someone; the cell phone is in our back pocket, so let’s pull it out and do two things at once.

It is easy to say there’s something wrong when a family goes out to eat together, and all of them are playing on their phones, rather than talking to each other. But that’s the extreme, the extreme-norm,  but still the extreme, I think. But what about taking it a step further? What about the family who is driving down the road together, and the kids are in the back seat, maybe on tablets or watching a movie, while the parent driving the car is carrying on a conversation with a friend. We can all reach our destination without ever having to actually talk to the people we are buckled in next to or in front of. How sad is this? And I have to say here that I am guilty. I have three little ones, who are pretty close together in age, and we are at the point in life when the easiest parenting moments I have, my biggest break, might very well be when they are all buckled in to car seats and can’t be making messes or getting in each other’s personal space, and so it is pretty tempting to grab my phone the second I get in the van, dial up a friend, put it on speakerphone, and then chat away (free handed….) because my kids are contained. I get it. I have lived it, but now I’m trying to break the habit of dialing up a number the second we pull out of the driveway and then chatting away like I’m all footloose and fancy free, because I’m not footloose and fancy free. My kids are in the car, and we’d all do better to be engaged in an actual conversation or listening to something together. Two things have shown me a new perspective on this. The first being that we now use CD’s in the car to learn memory facts for homeschool for the week, and not only do I want to learn history, science, English, math, geography, and Latin facts with the kiddos (I am supposed to be their teacher, right?), but I also want to be a part of leading the learning process, pausing when we need to stop for explanation or to remind the girls to listen to the lessons on CD instead of only chatting it up in the backseat the whole time. The second thing was simple and humbling: my oldest daughter said, “When you talk on the phone all the way to where we’re going, you don’t hear me ask for the song I want to hear.” Okay, so while she was probably mostly upset about not getting her song, as a mother who takes this mothering deal seriously, I hear, “You’re talking to other people instead of listening to us and giving us what we need. You’re ignoring us. We’re invisible the whole time we’re in the van.” And maybe that may seem a bit dramatic to some, but ya know, sometimes the drama my girls and I exhibit stems from true feelings, and so I refuse to write off her comment and my interpretation of it as not too serious when it probably is a pretty serious problem in our mother/daughter relationship.

So, where does this leave me. On most days, it leaves me with a van full of kiddos, lots to talk about, bunches to learn, tons of questions and complaints and jokes to listen to, and a cell phone sitting on the seat next to me with a speaker phone function just waiting to be used so I can connect with a friend instead of being in constant kid world 24/7. And I’m learning to choose the best option for this situation, and to just say no to the desire to ignore the backseat noise and chat about something grown up the whole way. Or some days I am left with a full day of homeschooling and lessons to get through and attend, while my phone rings off the hook (huh….old phone saying from before the days of cell phones…). I don’t want to ignore the people calling, but I also know I would be pretty unhappy if my kids’ attended public school and their teachers were taking phone calls in class. So, why would I, their mother, interrupt their lessons for a call? So, I usually leave my phone in a different room or turn the ringer off when I’m really engaged with the kiddos.

And man, this is hard, and sometimes, on those days when I feel way, way, way far away from super mom, it is even more difficult to tune in to the little dears in the backseat. But they’re my little dears, the ones I have and hope to be an all the time mother to, and so, the phone is just gonna have to wait. And ya know, when I need to get a quick question into the medical insurance company or to the cell phone company, or to check in with my husband, or to call up a fellow Mama for a little daily encouragement to help me through, then these smaller portions of my day can serve to teach my kids to be patient and to wait and that sometimes Mommy has to talk to another grown up, BUT, they’ll also learn that sometimes isn’t all the time, and that the people in front of me do not always have to take a backseat to the people on the other line. And don’t get me wrong, 9 times out of 10 I know and love the people on the other line, but ya know, most of those people are Mamas, and they get that sometimes your hands are full and your mind is more full, and they love me and my kids and know that we’re all trying to do the best we can. We always find a way to stay in touch. 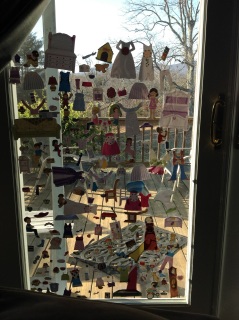 And anyway, this is the kind of thing that happens when I step away from the kids to answer the phone. Doorways get covered with stickers, and really, this is best case scenario.

View all posts by classicalviolets